I’ve been meaning to write this piece for some time now but I was hesitant because I wouldn’t really call myself a person of exquisite taste in lingerie. I’m in no way refined when it comes to fashion; I just happened to be one of those girls who fell in love with beautiful lingerie. But to hell with it, I’ve come to realize; I want to share something that I love, and I have the platform to do it, so why not?

In case you missed it: I do love collecting luxe pieces of lingerie when I do have the extra dime.

Lingerie has been revolutionized in the past few years from being a piece of fabric only to be worn for a man, to something that you can even casually wear just to treat yourself with, and amp up your mood. Over time, and with being exposed more and more to social media, I’ve learned a number of luxurious lingerie brands and up-and-coming ones that are not only tasteful and creative, but also more inclusive than your next-door Victoria’s Secret.

Although I sadly still do not have the pocket-deep disposable income to waste away on my one of only 3 addictions in life, I try to slowly build my collection through different flash sales here and there, and trying out new brands every now and then. 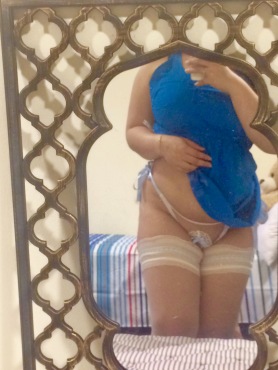 The very first piece of delicious luxury lingerie I’ve ever got was Agent Provocateur’s Laia side-tie panties which I paired with a frilly-top stay-ups in matching color (which you can see in the right-most photo above). It was quite out of the blue when I purchased it but I wasn’t able to resist. I mean, who can? 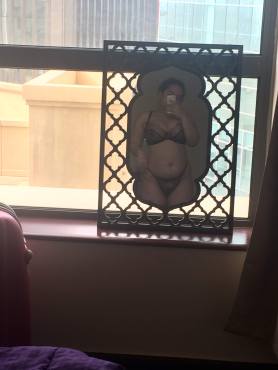 It was two weeks just after my first purchase that I went back to the store and got myself Agent Provocateur’s Lorna in black and red colorway. This is such a classic set which is no wonder to be reproduced all the time in different colors. All my life, I was under the impression that mesh isn’t really a big-busted girl’s best friend, considering that we need ALL THAT support. Girl, I was wrong. Not only did I feel the support on my bust, I felt instantly sexy and astounded. The matching thong with the cute bows on the hips was a killer; best believe it covered my whole coochie which doesn’t usually happen with the rest of the thongs I’ve previously bought. This didn’t let my meat spill everywhere, and was perfectly encapsulated. 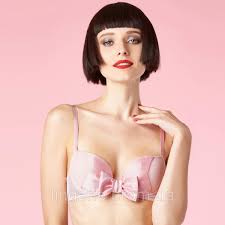 The next piece I’ve bought was Chantal Thomass’s Ballerine Pink Bra and Ivresse Briefs in Pink. I was inspired to buy it when I saw it on one of my favorite lingerie influencers, and it just looked stinking cute. I’ve always loved this piece, but it kind of breaks my heart to say that I wasn’t able to get the exactly right kind. The bra with the mesh panels on the side wasn’t available in my size so I had to get the one with the padding. The thong with the cute oversized pink bow on the front was not ordered by my local boutique, hence I had to improvise with briefs in the same shade. Though it wasn’t exactly the set I wanted, this set is still one of my favorites, but I’ll surely still look for a way to get the actual pieces some other time.

The next little item on my collection was an Aubade’s Femme Sensuelle Waist Cincher which I got for a ridiculously discounted price of just AED 20. Yes, I’m not even kidding. To think it was even the last piece and in my size, was such a lucky steal. It perfectly accentuates my curves and packs all of my chunky body in. It’s also funny how I just discovered the bra and brief set that it comes with, literally as I’m writing this, and it looks gorgeous when worn together. I might try to scout for these pieces at some point and add them as well. 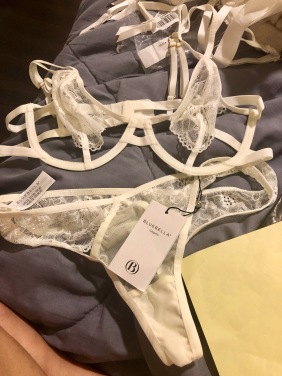 After that, I’ve had my first two white sets of Bluebella in Emerson and Gabriela. I don’t know what I was exactly on at that time, but I was briefly into bridal-looking pieces so I got these babies to satisfy my itch. Bluebella is one of those more budget-friendly items in my collection, though I still got both of them on sale. Their direct site actually doesn’t deliver to UAE, so I had to rely on one of their retailers which is Namshi. I’d say their style is quite simplistic and minimal sometimes, but the detailing is well-thought of and craftsmanship is decent.

In line with my sudden affinity to all things bridal, I also procured this Ann Summers’ Paige Body which is such a beautiful bridal-looking piece, especially when I paired it with the cream hosiery I previously gotten from Chantal Thomass. I had worn this for my man one time with my I had my hair down in curls, face beat for the Gods and Goddesses and some killer heels on, and I swear I felt like I was a lingerie model for a night. No kidding. The padding are quite thicker than my liking but it wasn’t a big issue because I had a good support for my big bust. 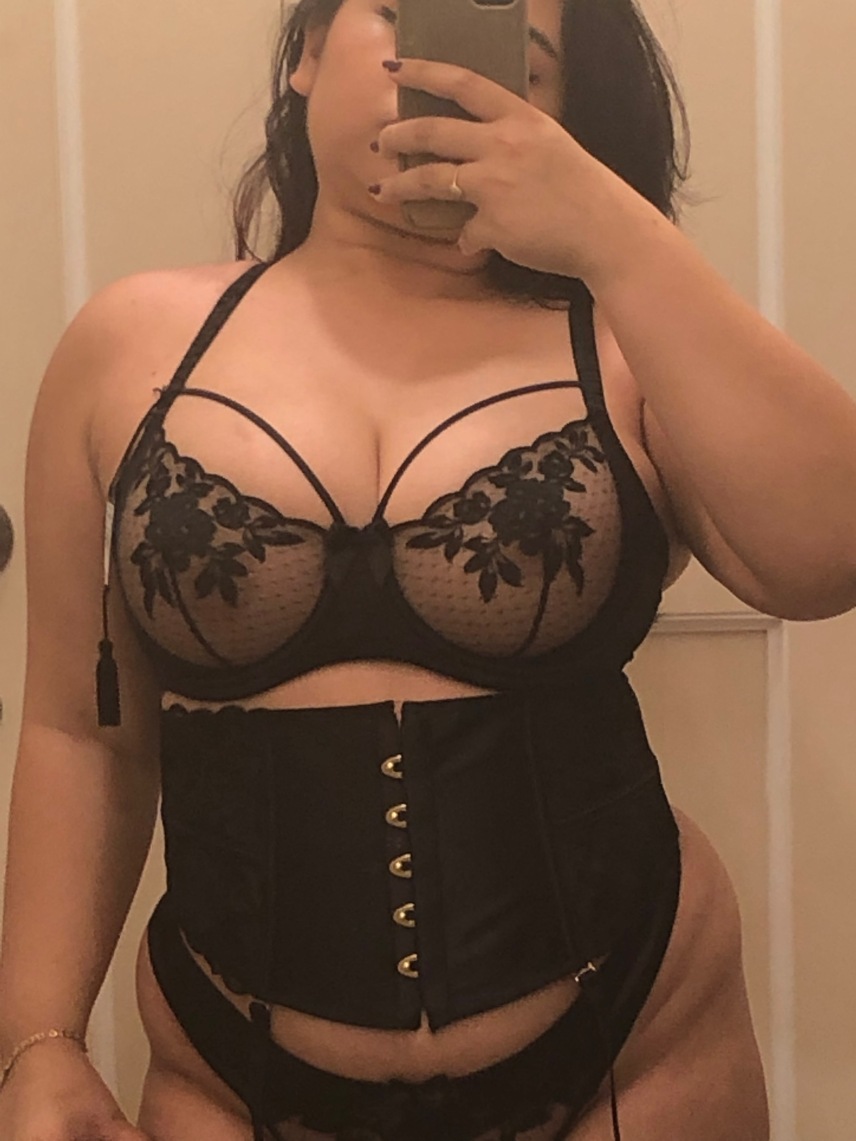 Next on my little list is the Reger by Janet Reger Black Embroidered Mesh set. As much as possible, I try to steer clear of black lingeries because it sometimes feel like a uniform to me, and I want to fill my lingerie box with pieces that have a pop of color. This baby made its way into mine however, because I just couldn’t resist how it looked on my body. The combination of lace detailing on top of mesh looks quite elegant and the addition of the suspender makes the whole set more sophisticated. It wasn’t a very expensive set too, which is of course, a plus for me. 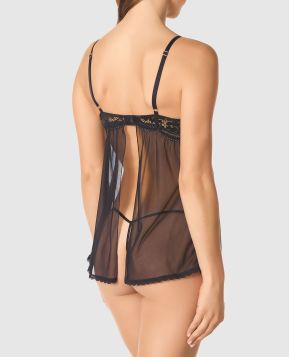 La Senza Babydoll in Black. As much as I hate to admit it but the only reason I tried on a babydoll was because my boyfriend’s a big fan of them. I’m not too much a fan of it myself, as well as silk slips and chemise. I still have the notion that it can sometimes look old-fashioned and vintage-y. This piece in particular though found it’s way to my heart with its light and airy see-through fabric and exceptionally cheeky open back which is quite naughty. One thing I probably would like you to note is that the padding for this babydoll is thicker than what you might want, especially since I find most La Senza pieces catered to those looking to enlarge their bust.

Agent Provocateur Joan in Nude. This is one of those pieces that’s been on my wishlist for some time now. It was a dream to even try them on, let alone actually purchase them. I actually came to the boutique looking for something else (AP Essie in Lilac) but sadly they weren’t doing the same sale online. I saw Joan on one of the mannequins and just has to try it on and take her home. It just hugs and exposes my assets in the right places and the right way. It’s the first set I have as well that is of stretchy material, which also makes the piece unique. As of recent, Joan is now one of AP’s icon sets.

Belle de Nuit Catalina and Noelia set in Rouge. I’ve wanted to try from this brand for a while now because of its inclusivity in sizes and just the ethics of the brand themselves. This is such a babe piece, especially the thong which accentuated my ass and hips in such a way I’ve never seen before. I must’ve taken a million photos in this lingerie just because of how it adorned my body. Though it felt like there was very little hidden or covered, it was very secure and still supported my body. It only costed me less than ± AED 200 to get this set as it was on a deal, but I had to pay at least AED 80 for customs fee/delivery which was quite a surprise for me. 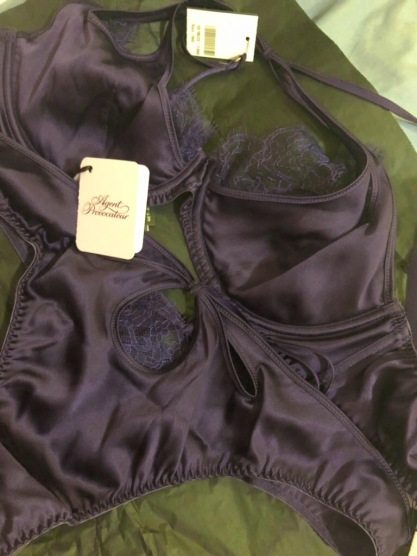 The latest addition to my little collection which I luckily scored in the recent summer sale from Net-a-Porter from their 80% off merchandise is this very beautiful Agent Provocateur Robyn in Purple. Like Joan, I’d been meaning to get this piece since I’ve seen it. It’s just a good and interesting combination of satin and lace insert. The halter bra is the right kind of bra to get if you wish to have that natural lift on your boobs. Plus the color Purple has a luxurious feel to it although not as bright as I expected. Overall, a good purchase. 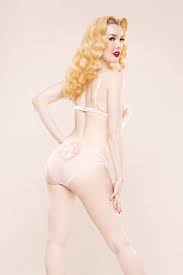 Copying from my last post: My new lingerie set is from the brand of Bettie Page Lingerie (part of Playful Promises), which is their Powder Puff in Pink Triangle Bra and Brief. It’s a simple mesh set with pink puffs on the front panels of the bra, and another one on the back of the briefs. I was a bit hesitant about this set because of the fit (as is with anything that is bought online), but this was very comfortable to wear and one of those sets that will instantly put you in a cheeky mood. I got it all at ± AED 220 (including shipping and custom fees), which is not at all bad for a complete set. I’ve also found out that they have reasonably priced hosiery (though I forgot to add some to my cart on my check out, big TSK!) which I might go and try out some time.

My collection is not yet as extensive as other enthusiasts, as you might’ve noticed, especially it’s only just last year when I started collecting pieces and I am working on a rather limited budget. I might actually be putting a pause on it though for a couple of months to pave way for other expenses but will satisfy myself looking at other people’s collection.

Believe it or not, it’s actually difficult sometimes to pick just one set to purchase when there’s so many beautiful designs and brands out there, hence why I also keep a wishlist with me. I might think of sharing that list with you at some point as well, just to get you as excited about them as I do.

How about you? What’s on your little collection? Or better yet, what do you collect?

1 reply to My Lingerie Collection

Bella is a full-bodied blogger based in Dubai, UAE sharing about cheeky writings on being a big girl — anything from beauty, health, food, musings and whatnot.

Full-bodied is based off of a term most used for wine — flavorful, satisfying, rich, solid and heavy. All of which I wish to embody in this blog.